In the much-anticipated video-game version of Fencebroke Promontory Gardens—a project admittedly early in the development phase—one thing is certain: seed-packets are to be the currency of the player's adventures.

There'll be no giant coins, rings, ammunition, inexplicable healing kits, grenades, or gemstones for my characters, no sir. Unless you count used shotgun shells, which some previous liege of Fencebroke was wanton enough to fire off in his suburban backyard with what must have been alarming regularity, I haven't encountered any of these useless tokens in the course of my gardening. Seed packets, on the other hand, always feel like real-life power-ups when I come across them. Their contents unleash such awesome abilities as Carrot Power, Kale Krush, Arugula Rocket, Tomato … well—tomatoes, and, in the right combination, they can unlock the gate to Lettuceland.

That's why, in Super Fencebroke World©, after any of the game's many small achievements—crops harvested, invasive weeds turned back, slugs thrown into the street, giant magic dragonflies tamed, saddled, and loosed upon the forces of pestilence—the player will be rewarded with seeds. Collect enough and you get an extra life. Find all the bush beans and you gain invincibility. The player, should they find themselves replete with seed packets, will be faced with a difficult choice—sow them to produce food for the hoe-wielding army of underlings they have amassed in preparation for a showdown with the Dark Lord Taraxicum (sorry, plant Latin joke)—or spend the seeds as currency, bartering for better tools, enchanted mulch, more powerful hats with wider brims, or any other character upgrades available. I'd choose wisely if I were you, but for now, just keep an eye out for those little seed packets.

The game should be up and running soon, right after I teach myself computer animation and find some venture capitalists venturous enough to invest in cutting edge horticultural entertainment, so stay tuned for updates. And lest you think this whole thing is a pipe dream, I have already, through some fast-talking and the promise of bunny cookies, recruited a young, up-and-coming recording artist for the soundtrack. Sorry, that's record-er artist. Recorder. That's the … the instrument she plays. You know, the plastic shrieky-flute? Oh, who am I kidding, she's my daughter. But trust me, she's good. (Look—she's getting those bunny cookies one way or another, so I may as well try to coax something useful out of her.)

That one! Right there—the Witch Hazel. Like ten thousand eyelashes mascara'd with sunshine. Smells like lemons and inspiration. You can't miss it. It's the brightest thing in February. Come on, stick your face in. Huff some Hazel, you'll feel better, trust me. 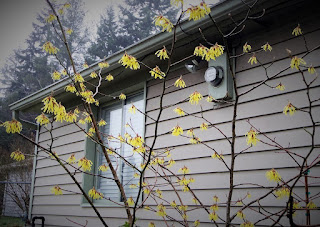 I think his name was actually Doug. But, yeah, the Good Woodchip Fairy is forever how Doug shall be known in the mythos of Fencebroke. For he rattled in like a diesel-powered sprite from nowhere on an otherwise humdrum afternoon, summoned by nothing more than an ancient ocarina and an e-mail. At the reins of his magical hydraulic truck, he beep-beep-beeped back into the driveway and unleashed a blessed tide of shredded pine and cedar to quell the infernal lawn I have neither the wits nor will to fight any longer.

Whether or not Doug approves of his role in the local pantheon I cannot say, though he seemed, at heart, a good-natured imp. A more pressing question posed by his visitation is the matter of his opposite. Is there, to balance the gardening universe yin-yanglike—a Bad Woodchip Fairy out there somewhere? Cackling over a fire-belching woodchipper in search of … well, I can't say for certain to what ends an evil Doug would employ such arbitrary malevolence, but whatever it is, I bet it's chilling.

Just in case, we shall erect a small shrine to Doug, the Good Woodchip Fairy, consisting of an upright pickle fork—his preferred tool for disseminating the medium of his enchantment—draped in Carhartt garb. To this effigy, we will place small offerings of pine needles and Monster energy drinks in order to stay in his favor and discourage the frightening prospect of his Other.


It is a small price to pay. Especially since this sea of woodchips was, inexplicably, free of charge.
Posted by Luke at 10:48 AM No comments: