Celebrate with me! Or don't, but at least humor me. This marks the first year in Fencebroke's history in which I have not spent the better part of the Fall, Winter, or Spring cutting and digging new planting beds. Woo! Wooooo—That's right, no more inching along with a half-moon edger drawing invisible shapes in the lawn; no more sod removal; no more attacking the underside of turf chunks with my hori-hori knife in an effort to salvage priceless native topsoil; no more little piles of once-buried beer bottles, car parts, and children's toys that were to be the previous owners' contribution to our priceless native topsoil; no more bulging mounds of removed sod popping up like monstrous mole hills around the yard—correction, no more additional bulging mounds of sod—I will do something with the existing mounds, mark my words; and, most importantly, no more hours burned away on any of the above when I'd much rather be doing ... almost anything else. Woo.

This year, at long last, the beds are dug, mulch has been laid, and the garden is, dare I say, established. Which should in no way be confused with finished, or even coherent, but somewhere along the way I found enough spare minutes and plants to at least lay claim to the newly cut beds by burying things in them along the way. Unfortunately, as new leaves and flowers begin to emerge this Spring in surprising places and unexpected colors, I must admit to a rather startling amnesia regarding what exactly I planted and why exactly I did so. Here's an example: 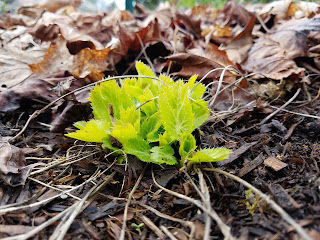 There. What is that? Kinda pretty I guess, but how big will it get? Will it bloom? When? If so, what color? Is it edible? Poisonous? Psychedelic? Noxious? Obnoxious? I have no idea. And there are dozens of similar examples around the garden. Each doubtless planted in one of many sleep-deprived fugues to which I have succumbed in the four-odd years of the garden's and, not coincidentally, my children's, existence. Did I keep the plant tags? Of course I did. They're in ziploc bags in the shed somewhere, just like my kids' birth certificates. Can I find, much less figure out which goes to which? No I cannot. I mean, with the plants. I have a decent hunch with the kids.

So far, I'm not inclined to remove anything until I see what it does. I can be patient. I will go through the seasons experiencing my own garden with all the joy and surprise of a public garden I've never seen before ... which is pretty much all of them. Yeah, I don't get out much. But I promise, just as soon as this green clump does something more interesting or identifiable, I'll let you all know. I'm sure the suspense is killing you. 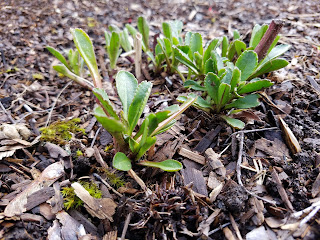 I'm always changing things, in the garden. Moving them around. Pots, plants, piles of dirt, whole beds (conspiracy theorists will insist that a mythical "paisley bed" once existed in the middle of the backyard—preposterous, of course), and the kids' plastic play slide, which never fails to suffer spontaneous disintegration into its component parts in protest every single time. It is, I suppose, one consequence of never having given a moment's forethought to the overall design of one's garden.

Instead, the design process here at Fencebroke has been compressed into a series of ultra-dense, creative vortices, in which I swirl around frantically for a few minutes while the kids are sleeping or distracted and lest I collapse forever into the imminent singularity of too much to do in too little time. While I flirt with this event horizon, my tried-and-true process is to gather up as many plants in my arms as I can carry (which, after a career spent largely working at nurseries, is rather a lot—this I mention not to boast, merely to paint a more absurd picture of myself biting off more than I can chew) and then run back and forth around the yard setting plants down at more or less random intervals until their composition is at least generally inoffensive if not particularly inspiring. Inevitably, to achieve this gold standard of Generally Inoffensive I will be forced to dig up a few existing, happily-rooted plants that were plopped down in the same haphazard fashion during a previous vortex. Plants excised in this manner are then added—raw, exposed roots dangling down with pathos—to my enormous, mighty armful, which unfortunately changes in composition but never seems to shrink. Then I just go back and repeat the whole charade until time runs out. It's like musical chairs. There's never enough space for all the plants, so there are always a few left out when the music stops. Pfff—a few—who am I kidding? By the time the needle slides off the record when Rowan falls off a patio chair or Daisy uses a little too much of the rain barrel for her "mud farm", I usually have more plants in my arms than when I started. SO many plants in my arms, and they're heavy, too—

Okay, okay, now I'm boasting—give me a break, I work in horticulture, there aren't many opportunities.

The results of each round of Musical Vortices attest to a given moment's random and unbridled creativity, which in no way meaningfully communicates with any other moment's random and unbridled creativity. What once, briefly, passed as Generally Inoffensive in its own right will inevitably rear up as Generally Appalling when viewed at a later date and in the context of the garden as a whole. When this happens, the music starts up, the tidal pull of distant creativity swirls, and I start grabbing plants again. This is an approach to the art of garden design that cannot, and indeed, should not, be taught. But it's the way I do it. And frankly I don't have time to do it any other way.

So ... who wants to see how many plants I can really carry?