I'm no glutton for punishment. Now I know that may sound disingenuous given my choice of vocation, hobby, and decision to sire children, but believe it or not it's mostly true. That's why I'm not about to look askance at the obscene bounty drooping along every roadside ditch this time of year just because it didn't come from my own garden.

Make no mistake, given the choice, I would much rather avail myself of existing produce rather than spend all that time and energy growing it myself. Trust me, if, say, tomatoes just popped up every Summer along sidewalks everywhere—to such ridiculous convenience that one must actually go out of one's way to not be assailed by a fruit that would normally flirt at $5.99 a pound from a farmer's market table—then I would immediately rededicate their prime Fencebroke real-estate to a new pickleball court. As it is though, there remains, to date, only one crop so brash as to defy cultivation by mere fact of its ubiquity.

I'm talking, of course, about blackberries, which—sure they're a noxious ecological disaster and all that—but jeez, if mother nature has a cheat code, this is certainly it. A rampant weed that gives you buckets of delicious fruit; it's like a thief who steals your car but takes you out to a fancy dinner several times a year (although to complete the metaphor, said thief would probably jab you with his steak knife at regular intervals throughout the meal). I always feel vaguely guilty when picking a good berry patch, like someone's going to jump out of the briar and close this blackberry loophole once and for all.

I suppose it's a good thing for my career and pastime that more produce doesn't flail at you from every vacant lot and fence-line the land over. If morning glory vines dropped hazelnuts and horsetails sported Brussels sprouts; if dandelion roots were baby carrots and knotweed could be pressed for a passable apple cider—the backyard gardener might soon go the way of the Walkman.

You know what? That's okay. I'd take one for the team and find a new path through life if it meant broccoli could be picked from sidewalk cracks. Now, who's going to get on that and make it happen? Anyone? Monsanto—I'm looking at you. Come on, don't let me down; I really want that pickleball court.

Twenty Reasons Not To Garden

That's right, with the oodles of spare time I've had over the last couple years—I mean, whenever I'm not working full time, helping raise one child, preparing for another, running an amateur sleuthing agency, blogging, and relearning the same Shovels and Rope song on the guitar every few weeks, I've managed to write a book.

It's called Twenty Reasons Not To Garden (And Why I Ignore Them All), and it's now available in print, Kindle, and limited edition cuneiform tablet from Amazon. 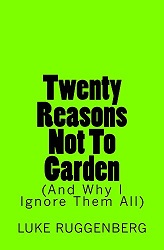 It's pretty much what it sounds like: Twenty reasons not to garden and why I ignore them all. I shouldn't really have to type that again. But it's perfect for gardeners, non-gardeners, and Sumerian businessmen alike. Funny, if you think this blog is funny, probably not so much if you only stop by Fencebroke for the stunning photography. Also, it's a pretty wicked green color, which is nice if you're into various shades of green.

So anyway, you can buy a copy or just take turns stopping by the Promontory and reading my copy. That's cool, too; it's a pretty quick read.


And now, if you'll excuse me, I've been remiss in my other duties. Methinks there's a hefty backlog of cases at the ol' driveway sleuth-booth.
Posted by Luke at 9:23 AM No comments:

What is the Same?

We have a set of flash cards we use with Daisy. Each one shows a handful of shapes or animals or objects or whatnot, and the goal is to come up with various similarities and differences between all the items pictured. Color, shape, size, quantity, gross and aggravating cuteness, shared phylogenetic heritage of depicted species, anthropomorphic absurdity—those sorts of things (let's just say we get different responses when Daisy is answering vs. when Daddy is answering).

So, in the spirit of this educational tool that has proven to be every bit as effective, fun, silly, and skull-crushingly intolerable for the parent after five minutes as most other early childhood games, I have decided to start a Fencebroke Promontory harvest version of these flash cards. Here's an early sample:

In this case, Daisy's answer might go something like: “These two are purple! That's the same.” or, “These two are cauliflower” or “The white one is smaller. That's different!” To which I would respond with a fatherly hug and assurance that her keen grasp of concepts such as these would all but guarantee her a life of happiness, fulfillment, and accomplishment the likes of which mankind has never seen. (For the record, her actual response when prompted with this image was nothing so sterling, I'm afraid—mostly confused pointing and “I don't knows”. I didn't have the heart to tell her this means she has no future.)

Daddy's response to the same image, however, would likely reflect his more intimate knowledge of the crops at hand. E.g.: “They're all brassicas; that's the same!” or, “These two cauliflower contained a greater density of earwigs than I would have thought possible, seemingly violating the physical properties of cauliflower as it exists in 4D space-time; that's the same!” or, “Each of these represent more of their respective vegetable than I normally eat in a year. I don't know what I'm going to do with any of them; that's the same!” or, (hypothetically of course) "The cabbage makes a great tetherball; that's different!" Ha ha. Not that I would ever use any of my precious harvest for sport. Ha ha. Ha ... I mean ... not anymore. Ha—<ahem>

Again, that's why this game is so great. Everyone sees something different.