Being a self-published author means you have to do a lot of different things. Which is unfortunate, because when I set about my writing "career" it wasn't because I wanted to do a lot of different things, it was because I wanted to, you know, write. And occasionally attend swanky awards shows, but I always just assumed these were an inevitable consequence of writing. Secretly I still do. Uhh ... don't tell anyone.

One of the things you have to do as a solo writer is figure out how to get people to read and/or buy what you've written. I've been told this is called "marketing". I'm not a fan. But, since our house gets very few door-to-door solicitations for indie garden lit. by itinerant publishers, critics, or book buyers, I've been forced to enter this strange world that is the psychology of the pocketbook. Wallet. Uh, credit card ... people don't really use pocketbooks anymore, do they? (Wait, is a wallet the same thing as a pocketbook?)

As I write this, on Thanksgiving evening, a great storm of controversy has erupted among those family members present about the term "pocketbook". It was a mistake to seek clarification in this setting.

Anyway, the point is, I now spend more time than I'd like trying to come up with novel ways to drum up readers and customers for the micro-niche of humorous horticultural miscellany I've so foolishly belly-flopped into. It basically turns my household into a scene from Mad Men. Well, minus the glamour. And production value. And, uh, rampant bigotry, infidelity, and sexism. But I've been told I could pass for a shorter, blonder, ever-so-slightly-less-dreamy Jon Hamm. Also, I've been trying to smoke more cigarettes, but so far all I can tolerate are the candy ones. Oh, and I wore a tie for a while, but it seemed to confuse the children. My poor wife has no idea what's going on.

This holiday season, especially, has kicked me into full on Mad Men mode. I put together several flashy proposals and presented them to myself in a high-stakes meeting. I criticized them ruthlessly and told myself to go back wherever I came from. I fumed, told myself off, and then fired myself for insubordination. Now I'm as confused as everyone else in my family.

So I settled on this, because I can't think of anything else:

The Kindle version of my book will be free again this whole Holiday-shopping kick-off weekend (Friday through Monday). Read it, if you haven't already, and then if you like it, maybe consider picking up the print copy as a gift for any gardener or otherwise weird person in your life.

That's it, that's all I got. Now, if you'll excuse me, I'm out of candy cigarettes. 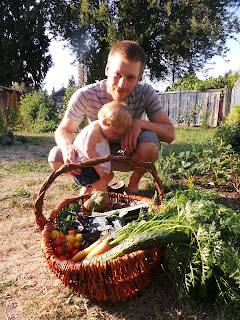 Hey, check it out! Fencebroke Promontory is currently featured on the Facebook group "Humans Who Grow Food". These folks do great work telling "stories of home gardeners and farmers across borders and cultures." It's inspiring stuff; even if you don't particularly care to see any more of my garden than you already have, do yourself a favor and check out their page! 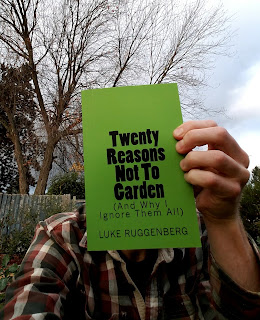 Hey, spread the word! Today, Sat. Nov. 11th, only: the Kindle version of my book will be FREE on Amazon! This is one small way for me to say thank you for all those who have supported and followed me on this blog, Facebook, and Twitter. Another way would be to actually tell each of you, "THANK YOU", but I don't know your phone numbers or where you all live ... or even who you are. This is easier.
Posted by Luke at 7:06 AM 1 comment:

Yesterday morning the vegetable garden was wilted with frost, the first of the year. This morning: snow. For many vegetables, the advent of freezing temperatures spells doom. My tomatoes, for one, resemble nothing so much as a crop blighted by the nameless evil from "Stranger Things". But a funny thing also happens in the garden when the weather gets cold. A funny, awesome thing. Some of the vegetables don't blacken, putrefy, or collapse; some of the vegetables ... they get tastier. Sweeter. Carrots, kale, rutabagas and the like actually improve after being nipped by frost.

I love that. Now, the reason why this happens is that certain plants, when they feel the cold setting in, start manufacturing extra sugars. These dissolved sugars act as antifreeze within the plant tissues, preventing ice crystals from popping open the plant cells like Wolverine at a water-balloon toss. Which is cool, even if your eyes glazed over during those last couple sentences. Think about it: there's an entire class of vegetables who are like, "Hey guys, things are getting rough out there, should we ... you know, get more awesome?" And in this spirit, they join the ranks of other, more-awesome-under-pressure heroes such as first-responders, parents who lift cars off of trapped children, and reality cooking show chefs who are able to conjure a flan from thin air with 3 minutes left on the clock. It's a pretty elite group, one to which I myself would aspire were it not for my own tendency to shake like an aspen leaf when confronted with ... well, confrontations. And when it's snowing outside, forget about getting sweeter, I'm pretty sure my own tissues turn bitter from extra coffee—my own antifreeze.

So let us all, this Winter, strive to be more like the rutabaga. Let us all, in life, turn a little sweeter under duress, a little stronger when the world turns cold. I challenge you, dear readers, to be the vegetable in your life that looks around at the chaos and gloom and says, "Hey guys ... let's be a little more awesome".

As for me, I'll be inside, drinking coffee. But I'll definitely be cheering you on.
Posted by Luke at 3:11 PM 1 comment: