Cabbage In The Hay

We recently celebrated our daughter's fifth birthday with a good old-fashioned hay-hunt.  Screaming children throwing hay all over the yard in search of candy and coin—it was a delight. Really, if there's a better way to get a pile of kids good n' itchy (not to mention sugared-up) I haven't heard of it. We'll call it a parenting win.

But I must confess to ulterior motives in pushing for the hay-hunt over other, more common birthday candy-delivery systems. Pinatas, goody-bags, IV glucose drips—any or all would have sufficed in this case. But Dad seemed to really want a hay-hunt, for some reason.

And that's because, well, Dad really wanted some hay. For the garden, of course. It makes a nice cozy blanket for all those shivering rutabagas and Brussels sprouts in the Winter veggie garden. A birthday hay-hunt, then, would conveniently kill two birds with one stone. As a parent, you can never kill too many birds with each of the precious few stones you are afforded. (Would someone please inform that miserly resource manager in charge of rationing stones that there seems to be an awful lot of birds down here?)

A couple of weeks after the party, I even convinced the kids to help me spread the same hay in the garden. "It's like tucking-in the plants for Winter." I said. Which prompted a half hour or so of  pretty adorable, Goodnight Moon-esque vegetable tuckings-in—and another week of pulling spiky hay fragments out of socks and underwear. To the kids' delight, while distributing the hay, they also turned up a few more rogue pennies and a chocolate bar or two that had been overlooked in the birthday frenzy!

All I can say is: what a magical world this must seem, to children, where treasure and prodigal Twix bars turn up even in the course of mundane gardening chores. I, for one, think that adults could do with a few more of these little magical surprises in the course of their own daily lives. Not winning the lottery, or scoring a free pizza for submitting a customer-service survey—nothing so grand or life-changing. I'm talking about small, unexpected delights which, when encountered occasionally enough, manage to change our expectations of the world and what it might have to offer. A cold-brew coffee truck that inexplicably tails the ice-cream truck one hot Summer afternoon. Health insurance decides to cover weekly massages. No traffic on a Tuesday morning. Maybe that car honking so rudely behind you is actually trying to get you to stop because the driver is in advertising and thinks you have the perfect face to represent a new line of "Haggard Dad" skin-care products.

Right now, when I dig through the hay, all I can reasonably expect to find are cabbages. Which are great, don't get me wrong, but, well, I did plant them there. Not much of a "surprise!" factor. Still, now that I think about it, there is something a little bit delightful about a cabbage. Just look at it ... 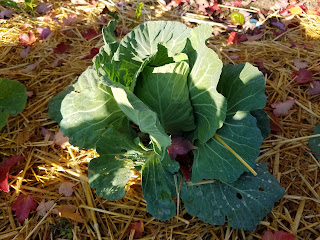 Right? Could it be then, that I've just forgotten how to be delighted by all the wonderful craziness the world hides in plain sight? Are we adults thrashing around, trying so hard to find something else in all this hay of life that we can't see the cabbages in front of us? I mean, my son just said "Ni-night bwoccowi!" and threw a handful of hay at the ground. That's at least as magical as a Twix bar, right?

But next year, we're doing a pinata. The metaphors are better.